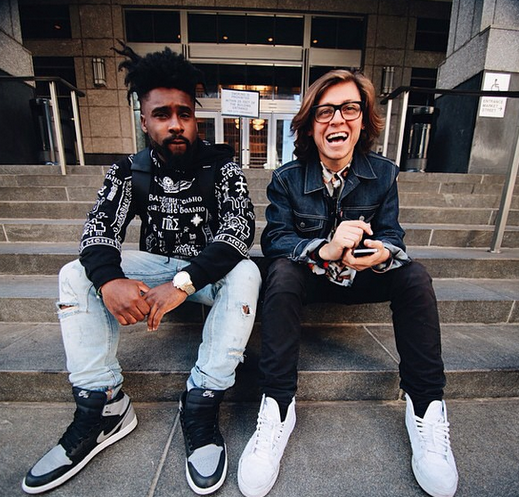 Two of Philadelphia’s most successful independent rap duo’s currently on the rise, OCD (Moosh & Twist) stopped by Hot 107.9 Philly’s Morning Show to discuss their rise to fame at such a young age, tour life, and much more! Check out their exclusive interview with Laiya and make sure to be on the look out for these two now and in the future!

Before opening up for Lil Wayne and Drake in Camden the other night, Yo Gotti sat down with Q Deezy for the very first time. During the interview, they spoke about Gotti’s come up, getting serious with rap, and towards the end Gotti speaks about Meek Mill. Peep the full thing though for yourself below!

Philly’s own Quilly stopped by The Q Deezy Show to talk about the release of his new self titled project titled, QUILLY. Quilly also performed an exclusive verse over Jeezy’s “Seen It All” instrumental.

“He is one of the best rappers I’ve heard out of Philly in a long time. I can see him being the next one up out of Philly.” – Q Deezy

You can grab his new mixtape “QUILLY” here.

American Idol contestant Marcus LaBon took a few minutes after his set to have a little one on one time with Shamara. Check out the video of Marcus serenading Shamara below! What do you think ladies?

Famous actor Cuba Gooding Jr. and Philly born film producer and director Lee Daniels stopped by the Philly Morning Show to discuss their upcoming movie, The Butler starring Oprah and Terrence Howard. During the interview the two got candid about Race, how it played a major role in The Butler. Cuba even talked about the conversation that he has had with his two teenage boys in dealing with Race in America. Check out the interview below…

Marsha Ambrosius stopped through the Philly Morning Show to spend a little quality time with Shamara & Laiya. During the interview Marsha talked about her latest single “Without You,” featuring Ne-yo. She also talked about love and how it helps her with her music. Check out the interview below…

I got a chance to interview Mont Brown and his Band Astronauts Really Fly (ARF). Mont Brown and his team is on a mission to stop the violence. He has a story to tell and won’t stop until it’s heard by all.Up and coming rapper, Mont Brown, is teaming up with Sneaker Villa to throw a “Stop the Violence Kickback Block Party” in efforts to cause a breakthrough on the rising issue. Check Out The Interview Below!

Check Out ARF’s Hold On Video

Think of a “bona fide star,” a person who is seemingly a single breakthrough away from achieving their goals . This describes an individual whose talents are  “undeniable,”  and are already “there,” however they are just waiting for the rest of the world to discover them. Within the crowded field of those trying to “make it, ” there are those select few who will actually make it.  These are “The People To Watch Out For.”  In the the 3rd installment of “People To Watch Out For In 2013,” we proudly present  GoGo Morrow. GoGo Morrow is a tripple threat singer, song writer, and dancer from the city of Philadelphia. She has already began to make her mark across the world. Gogo started out as a back up singer for Lady Gaga and has quickly catapulted herself to center stage, where she belongs!

I had the opportunity to see GoGo perform for the very first time at the  “She’s Next” showcase.  Her performance was that of a seasoned professional singer/ dancer . She possessed a  “magical quality,” hitting  every note and dance move with determination and style. GoGo exhibits all the qualities of a great recording artist. She is amazing vocally and puts on a” crisp and clean ” performance. GoGo simply  knows what she’s doing and she does it well!  I even joked with her saying , “I felt like I was at a Beyonce’ concert .”  While  that may be an extremely premature statement to make, GoGo Morrow is a rising star with limitless possibilities and is surely someone to watch out for in the year 2013.

GoGo “Yeah, I said GoGo” Morrow is an atypical, creative force making her indelible mark as a singer, songwriter, and dancer. In her travels, the first thing people always ask is “why the name GoGo?”
Quentin Tarantino’s Kill Bill: Vol 1. can answer that question. GoGo Morrow states, “GoGo Yubari’s character was an innocent-faced, assassin that you never saw coming. The same holds true for me as an artist. People never see me coming but I’m here and I’m a triple threat as a singer, writer, and dancer. I’m always up for a challenge.”
Indeed, being up for a challenge has always been in her blood. GoGo Morrow got her start singing in West Philadelphia as a small child listening to her father sing. As she began to find her own voice, her father would challenge her to a sing off. If she kept up, she’d win $2 – quite the payoff for an aspiring, young artist.
GoGo Morrow began singing in church and, at age 10, joined the Prince Music Theater’s Rainbow Company where she honed her theatrical skills over the next seven years. She went on to earn a degree in Music Business from Millersville University. During that time, she worked as an intern for Philadelphia International Records, then as an assistant at Def Jam under the tutelage of her mentor Record Executive Leesa Brunson.
Combining all of her life experience, GoGo Morrow secured a coveted 2 year engagement as a background singer and dancer for Lady GaGa’s The MonsterBall Tour. She has also performed as a solo opening act for Rick Ross, LilWayne, Fabolous, and Kendrick Lamar, just to name a few. Most recently, she performed at the WaWa fes8val, opening for Lauryn Hill, Common, The Roots, and Queen Latifah.

Check out the video below for an  exclusive interview with myself and GoGo as well as live performance footage from the “She’s Next” show case :

The 2013 BET Honors red carpet was nothing short of a star studded occasion, but in my opinion the most exciting “star” to talk to was inspirational leader, director and overall great motivator T.D. Jakes. During the 2013 BET Honors T.D. Jakes was honored for his great accomplishments in the field of education. While on the red carpet I had a few moments to talk the honorable T.D. about the people who inspire him and the key to a happy marriage. Speaking of marriage,  T.D. was accompanied by his pleasant wife Serita Jakes  on the carpet, the pair looked happier than EVER!  You could really see how much she adores him!

In this edition of  ”Digital Diva” exclusives you can watch T.D. talk about his personal inspirations and the KEY to a happy marriage!

Fashionista’s and trendy fellas a-like the WAIT is over. The days of  having to surf online or go to New York to find trendy QUALITY clothing at an affordable price are gory thoughts of the past!

Recently, I had the pleasure of going to H&M’s grand opening at King of Prussia Mall. One might immediately say” I thought they already have an H&M at King Of Prussia Mall.” If you are someone who thought the aforementioned statement, you are absolutely correct,  BUT this H&M is not like any other H&M’s in our area. The brand new 2 floor 27,00 square foot shrine of fashionable greatness carries H&M’s ‘trend collection.’ What is that you ask?  H&M USA’s spokesperson Nicole Christie describes the trend collection as H&M’s  high quality brand of clothing that is exclusive to  H&M’s ‘flagship’ stores such as New York and Las Vegas.

He’s back at it.  Frank Ocean’s Official video for “Pyramids” is just as mysterious, mind-blowing, and captivating as his last two videos for hit singles “Swim Good”, and “Thinking About You”.  What else were you expecting though, honestly?  Watch the video below and also watch Frank’s LIVE performances for “Thinking About You” and “Pyaramids” on Saturday Night LIVE.

This morning I had a chance to listen to Trey Songz “Chapter V” album in advance from start to finish.  I must say I’m impressed.  I was expecting a CD full of sex, money, drinks, ya know, the Trey we’ve been accustomed to for the past few years but he always brings us back to the original Trey Songz.   Remember him? The braided, skinny guy that was full of that traditional love and had us all hooked on “Gotta Make It” and “I Gotta Go”?

Trey took us back to that original love with a few tracks on Chapter V with songs like “Fumble,” “Without A Woman,” “Simply Amazing,” and “Never Again.”  There’s also a bonus track “Almost Lose It”, which is pretty much his wedding day through his eyes, a different side of Trey we don’t see/hear too often.   The CD itself is a very well put together project.  Despite the criticism Trey receives from his shameless club songs, “2 Reasons” (B*tches and Drinks) was in the Top Ten of Billboard’s Hot R&B/Hip-Hop chart along with the album’s first single “Heart Attack”, the song about a self-exploding relationship.   Not many artists can achieve the same level of success with such contrasting material.

Actress, Carmen Ejogo appeared on The Q Deezy Show and had plenty to say about her role in the movie “Sparkle,” (which hits theaters August 17th!). She also talks about her encounters with the late-great Whitney Houston and tells us what inspired Whitney to take the role in “Sparkle!”

Wiz Khalifa: “Amber Rose Will Have My Baby!” [Exclusive]

Eve On Stevie J: “He Was My First Love!”

DJ DAMAGE of Philly’s Hot 107.9 leaks an exclusive off of his anticipated mixtape “The Caution Tape 2” Hosted by DJ Drama.

Keyshia Cole stopped by Hot 107.9FM and The Q Deezy Show to talk about her relationship with husband Daniel “Boobie” Gibson and even gave women an inside look into the essentials of finding a good man! Check out the interview below as Keyshia Cole and Q Deezy discuss married life, her new shoe line, and her newest album Woman to Woman. Side note: We love Keyshia Cole’s hairstyles!

Wiz Khalifa: “Amber Rose Will Have My Baby!” [Exclusive]

Eve On Stevie J: “He Was My First Love!”