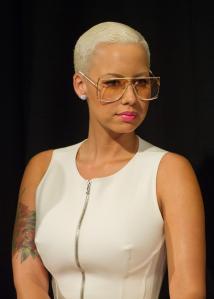 She revealed on the Red Pill Podcast that her various Instagram posts net her $2 million a year.

Amber does a lot of sponsored posts for companies like FashionNova and diet products BoomBod and Flat Tummy Company.

She has also done posts for adult toy make Lelo.

Well, this is progressive. Amber Rose allows her 5 year-old son to curse in front of her. She says it is a form of expression.

In a recent interview with US Weekly, she said, I let my son curse in the house because it is a form of expression. I tell him when it’s appropriate and not to say it at school.

There is one word that her son, Sebastian, is not allowed to say-the n-word. She tells him to replace that word with the f-word. 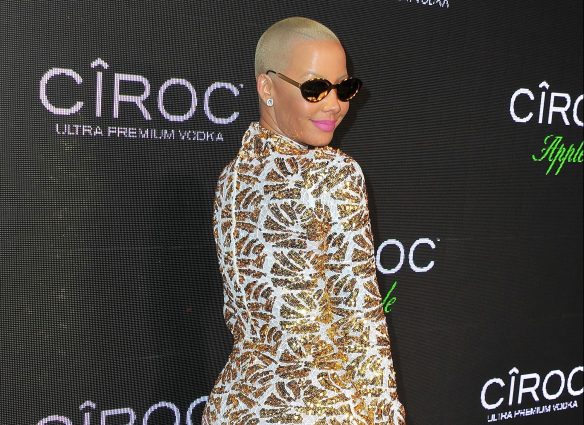 Amber Rose is dating Tyga’s best friend, “AE”, who is the President of A&R at Def Jam Records and has been dating Amber for the past few weeks, according to sources.

The couple was seen at Amber’s annual “Slut Walk”, with Blac Chyna being Amber’s BFF, it’s likely that Chyna and Tyga may run into each other a lot while there BFF’s are dating.

Tyga and Blac Chyna seem to be okay with Amber and AE dating, for now. 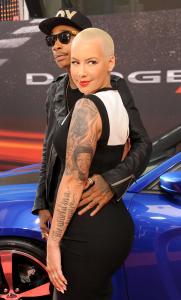 Cops are on the hunt for the engagement ring that Wiz Khalifa gave Amber Rose six years ago after Rose said it was stolen.

TMZ reports that Rose filed a report with the LAPD after she went looking for the ring, but it was nowhere to be found.

Wiz gave Amber the ring back in 2012, and the ring is valued at around $150,000, and finding the ring is becoming difficult because Amber apparently has many people in and out of her home on a daily basis.

To make matters worse, she’s really heartbroken about the missing jewelry because sources say she wanted to give it to her son Sebastian to give to his bride to be when he got older. 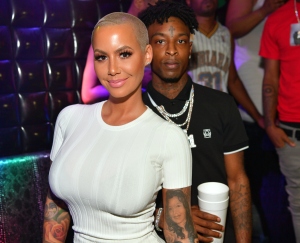 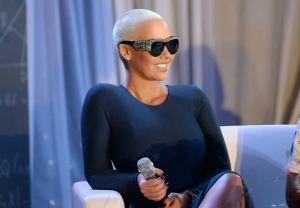 Amber Rose received a lot of backlash after saying people from South Philly aren’t ‘traditionally beautiful’ like her..

This is the original video:

Aside from the two days worth of lit performances, Coachella is a highly anticipated event for celerity fashions.

From short shorts and distressed denim to colorful tunics and classic flower crowns, celebs like Kylie Jenner, Solange and Drake are just some of the stars who showed out with their style and made Coachella 2017 another weekend to remember.

Take a cruise through and tell us your favorite fashion moments.

Check out the checkered Gucci Mane.

Diddy rocking the stage in all red.

Jasmine Tookes is so festival ready.

Drake is anything but mellow in this yellow. Future is letting out his ‘Hendrix’ side with the rocker leather.

The Weeknd’s denim jacket is anything but ordinary.

Solange and Joanne The Scammer looking like they just pulled off the ultimate heist.

Katy Perry looking funky with her new cropped do’ and colorful fur.

Amber Rose dealt with her relationship issues just like any other bad b*tch would – by getting a new tattoo.

The model and TV personality took to Instagram to reveal her fresh arm tat, a gorgeous depiction of the famous Hollywood Hills sign, inked by Nikko Hurtado at Black Anchor Collective in California. Hurtado also flaunted his work on IG, captioning the photo of the epic ink, “Thanks for being tough and can’t wait to continue it. More work to come.”

The black-and-white creation is one of many tattoos Amber already has. She hasn’t explained the inspiration behind her latest ink work and it seems to have no (direct) correlation to the fact that she just went through a public breakup with Val Chmerkovskiy – but what better way to relieve her stress?

At the end of the day, she’s still a down home girl from Philly and that’s what we love about her.

The problem with sharing all your personal business on social media is that when things go bad, people want immediate updates. Five months after going public, Amber Rose and Val Chmerkovskiy (above in blue) have reportedly gone their separate ways.

As reported by Us Weekly, an insider says their schedules were an issue. “Val has been on tour and really hasn’t had time to see her too much. It fizzled out, but it wasn’t serious to begin with,” the source says, adding: “I could see them hooking up again in the future.”

The couple met through Amber’s Dancing with the Stars partner, Maksim Chmerkovskiy (above in white). Both brothers are professional dancers who have appeared on the celebrity dance competition.

While other sources say the pair were just too different, this isn’t the first relationship that Amber has had that’s started steamy and fizzled–out.

If you're ready, it's too late

Val tweeted a simple statement that may be related to their end. “If you’re ready, it’s too late,” he said. But hopefully, despite what cause the split, they can remain cordial.

The Slut Walk founder (who is currently on a social media break) was spotted hand in hand with Dancing With The Stars pro Val Chmerkovskiy in Los Angeles over the weekend. Paparazzi caught up with the pair as they headed to dinner at West Hollywood hotspot Delilah. The couple looked chic in all black, with Amber smiling and seeming to be in good spirits.

Amber was paired up with Val’s brother, Maks, during her latest stint on DTWS. Though her run on the show wasn’t quite successful, the social media vixen formed a strong bond with her partner, whom she refers to as her “brother.” And clearly, cupid was working his magic in the process. You may remember seeing Amber and Val cozied up at Amber’s pool party back in October.

Though Amber and Val have been linked together for months now, Val is keeping it casual “I can’t control what people think,” he told Entertainment Tonight about their budding romance. “I live my life and I try to live it, you know, the way I want to live it.”

We can’t wait to see where their newfound romance goes!

While you were cutting your slice of Turkey and piling on mac-n-cheese, celebrities were doing the same this week for Thanksgiving. In the spirit of love, a lot of celebs put their romantic relationships aside to co-parent and enjoy time with their children.

We also saw a couple dance-offs, baby bumps and delicious plates from individuals who know how to throw down— Ayesha, we’re looking at you!

See how your favorite celebs enjoy Thanksgiving on the next pages.

In the giving spirit, the Obama family served dinner to veterans on Thanksgiving in Washington, D.C. But what had everyone talking was the young man standing next to Sasha— who may be her boyfriend. We can neither confirm nor deny, but we kind of hope he is.

For the holiday the co-parents spent time with family in Honolulu, Hawaii where they cooked up a storm. In tandem with her extra-ness, Mariah shared photos of her grocery shopping adventures in a low cut jumpsuit, skin tight jeans and heels. But all in all they seemed to have a lovely time— despite their recent divorce, Nick’s new baby on the way and Mariah’s sometimesy fiance, James Packer.

Baby Bash was the star of the home for Amber Rose and Wiz Khalifa’s post breakup Thanksgiving. The couple seem to be doing an amazing job at co-parenting, as their son was filled with excitement Thanksgiving morning. When asked what he was thankful for, their 3-year-old said “Halloween decorations, pumpkin pie, chicken and carving pumpkins”— clearly he misses Halloween. Nonetheless, they were spotted as a happy family heading to a party in Los Angeles for the day.

The Wades and the Anthonys

In New York City, the Wades and Anthonys spent another Thanksgiving together but this time, shared a plate with New York Knicks’ player Derrick Rose. Gabrielle Union and Dwyane Wade posed in the hallway for cute pics— but it’s not clear if Dwyane’s sons were with them. Also in attendance were La La’s cousin Dice and friend Po, who had some fun on SnapCHat with the girls.

Ciara and her baby had a big plate of goodness during her first Thanksgiving as a married woman. The couple who are welcoming a baby soon, spent the day before at a Seattle Children’s Hospital to spread joy.

Newlyweds Teyana and Iman Shumpert celebrated their first Thanksgiving with baby Junie, who was dressed up as a turkey for the occasion. While Shumpert is working on another championship ring with the Cleveland Cavaliers, Teyana is promoting her Fade2Fitness workout videos.

Close as ever, Kelly Rowland spent the holiday with Tina Lawson and cousin Angie in Los Angeles. Earlier in the week they were in Baton Rouge with Solange for the Hometown Heroes awards in conjunction with BeyGood and Essence. To occasion was to raise funds for post hurricane relief in the mainly black Louisiana city.

As always, Chrissy Teigen was getting busy in the kitchen while simultaneously giving cooking advice on Twitter. The cookbook author and foodie also shared video of the family at work in the kitchen. In this video, John shows off his mac n cheese skills.

The rapper/actor and his beautiful family enjoyed the holiday with some bonding time. Him and his wife, Simone Smith who share four kids together, celebrated 21 years of marriage this year.

As expected, Ayesha cooked up a storm for her hubby and family. On the menu this year was creamed spinach, orange and honey sweet potato casserole, deviled eggs, cranberry sauce, ham and mac n cheese— have mercy!

Queen Oprah invited a group of girls from her South African school to spend the holiday with her. But days before she was in Milwaukee enjoying family time with Btedman Graham, cooking so much that the kitchen was a warm 83 degrees.

Always having fun, the Braxton shared a meal but not before having a dance party in their living room. Toni, who’s suffered from health issues this year, was front and center shaking her butt for the camera. So good to see her joyful!

How To Survive Thanksgiving With Your Boyfriend’s Family

Well, that was fast!

After months of anticipation (on all our parts, LOL) Blac Chyna and Rob Kardashian finally welcomed their baby girl into the world today, and aren’t hesitating to share all the details with their fans.

We learned this morning that the newborn came into this world via c-section at a healthy 7 lbs. 5 oz., and her name is Dream Renee Kardashian. We couldn’t think of a more fitting name if we tried.

How gorgeous is she?! Here’s another pic, this time with her auntie Amber Rose:

The arrival of this precious little thing is truly a welcome distraction and source of joy in what has been, for most of us, a very dark week. Welcome to the world, little Dream!

Amber Rose can no longer be called Wiz Khalifa‘s ex-wife or Kanye West‘s ex-girlfriend, because Muva Rosebud is making a name for herself.

According to reports, the Dancing With The Stars contestant will be paid $8 million for a meet-and-greet world tour with topics centered on sex and love called the Amber Rose Live Tour. It is set to kick off in 2017 and will feature interactive segments about sex, love, and relationships, with special guest interviews, and personal anecdotes about her rise from exotic dancer to female icon.

The tour will stop in multiple cities, including New York, Miami, Las Vegas, Atlanta and Chicago with DJ Tori Brixx opening up for the star.  Although the model has a popular talk show, podcast and is a contestant on DWTS, this marks the biggest payday of Amb’s career thus far—but most likely not the last.