The ATL rapper had been booked for ten shows in five of Canada’s provinces, but past issues with the law were prohibiting him from making the shows across the border.

That was until an immigration attorney helped him get a temporary resident permit so he can perform.

Gucci will be doing performances in Canada later this month.

Gucci Mane has some serious issues with the mother of his son Sheena Evans.

Sheena presently gets $2,076 in support and now is suing Gucci for $20K in child support per month and has even filed a petition to issue a warrant for his arrest.

Gucci clapped back by filing his own documents to have the case thrown out.

Rich Gang (Young Thug & Rich Homie Quan) split up in 2014 as RHQ wanted to focus on his solo career. Gucci Mane took to twitter to send an offer for $1 Million Dollars and an opportunity to reunite the long-standing beef between the two. Check out the tweet below.

Young Thug did respond via Twitter turning the offer down.

Gucci Mane has been the iciest rapper of all time for his entire career, and now it’s time for him to really engrave that into all of our brains, and make sure he goes down in history books the right way. Fans were tickled a few weeks back when Gucci announced that the title of his upcoming album would be El Gato The Human Glacier, and now there’s confirmation that not only is that the real album title, but the album artwork is even more outrageous than the name itself.

Mane announced that his next project is going to be released next week, on December 22nd. He just dropped his previous album Mr. Davis in October, so fans haven’t had to wait long at all for some new music, which is something we can always count on the East Atlanta native for. Many were excited off of the tracklist announcement and the official release date alone, but once the cover art for the album was revealed, it was clear that El Gato The Human Glacier has the potential to be one of the iciest albums of all time.

Though a lot of Gucci’s projects tend to feature a mixed bag of different artists, according to this tracklist, the only feature is from his fellow Atlanta trapper 21 Savage.

Check out some tweets below to see how fans reacted to their first time seeing Gucci Mane’s new album artwork.

gucci with the artwork of the year lol https://t.co/1dCy1TaDgu

This cover art is gonna go down as one of the greatest, especially when the polar ice caps melt.. https://t.co/jtnPUN22MU

so icy u turned to a glacier? damn

Gucci and Keyshia had their rehearsal dinner last night in matching red outgits and Gucci surprised Keyshia with a new car; a $315K Rolls-Royce Wraith.

According to TMZ, the couple’s inviting folks out to their wedding at the Miami Four Seasons with $1,000 a piece invites engrossed with Swavoroski crystals.

The Couple is only inviting 100 guests ranging from Drake to Rihanna to Rick Ross. 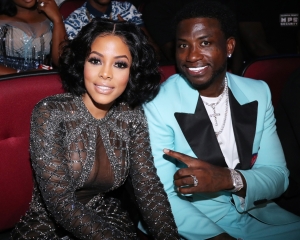 Kodak Black is the Gucci Mane of 2017 when it comes to getting arrested every few months.

Just three months after he was released from lockup, Kodak is back behind bars for violating the terms of his house arrest and probation. TMZ reports that the Florida rapper was booked into Broward County Jail Tuesday after a court hearing, where the judge found he violated a number of conditions of his probation. Officials say Kodak failed to complete an anger management program, and left his house without permission at least two times — once to a strip club and and another time to fly to Adrien Broner’s boxing match in Cincinnati, Ohio.

The arrest couldn’t have happened at a worse time than now, as Kodak is in the middle of his Back and Better tour and was scheduled to perform in New York City on Wednesday. Atlantic record released a statement apologizing for the incident and revealing that the remainder of Kodak Black’s tour has been postponed.

Details on rescheduled tour dates are coming soon. Check out the clips above of Kodak heading to court before his arrest.

In fact, Waka just released a diss track called “Was My Dawg” and it’s pretty clear that he’s addressing his old Brick Squad friend throughout the song, seeing as the artwork is Gucci’s silhouette and Waka went so far as to tag the East Atlanta rapper in the IG promo.

Waka raps, “Always yelling Brick Squad, always talking fam first/ When your ass got locked up, you turned on the fam first/ Always taking fucking credit, never put in no work” and more, but never calls Gucci out by name.

While chatting with BBC Radio 1Xtra, Waka revealed the track was a way for him to express his anger before things got out of hand. Catch the full interview here and listen to “Was My Dawg” up top. Do you think they’ll ever be able to set their beef aside?

[ione_embed src=http://www.worldstarhiphop.com/embed/100962 service=worldstarhiphop width=640 height=360 type=iframe]
This should be relationship goals for a lot of people. Check out this video and see Gucci Mane propose to his long-time girlfriend Keyshia Ka’ior last night at an Atlanta Hawks game.

Keep scrolling to peep a close up of the ring and more photos below!

Rae Sremmurd‘s hit single “Black Beatles” has been the talk of social media lately, thanks in part to the popularity of the mannequin challenge. The infectious track, produced by Mike Will Made It and featuring Gucci Mane, officially became the number one single in the country this week, the first number one for all involved.

Triple salute to my brother mike will and Rae sremmurd !!!!Black Beatles number one record! my first number1 and to do it with fam! Perfect

Nicki Minaj honored the success of her friends and collaborators with her own remix,  “Black Barbies,” on Tuesday, making it some of the first music she’s released that doesn’t have any fingerprints of her ex-boyfriend Safaree Samuels. If anything, Nick’s punchline heavy verses should officially shut down talks that she needed her ex to help write her bars.

Of course the Twitter trolls seized the opportunity to poke fun at the queen Barbie. That’s their job. But after we laugh, we should stay aware of the subtle misogyny that jokes about Nicki’s career and relationships with Safaree and Meek Mill encourage.

Whether you’re mocking Meek for opening up for his more famous lady or downplaying Nick’s penmanship because she’s not a man, the gag is old. These kinds of jokes weakly comply to the racist and misogynist standards of the old America.

Anyone planning to brave out the next four years here should adjust their mentality with that in mind. It’s no longer funny to joke about systematic oppression. The beast is looking us dead in the face and we only have ourselves to blame if he wins. So accepting any of his tricks is inexcusable. Look around: Gucci Mane is sober, our president is orange and the new Beatles are Black.

Maybe not quite the mannequin challenge ..but still a banger > Black Beatles -Rae Sremmurd 🎻😎 pic.twitter.com/xMm5qldeca

If this British man with a fro playing America’s latest, greatest export on a violin isn’t proof, the source of America’s greatness never changed. All hail the Black Beatles.

Rick Ross, Gucci Mane, 2 Chainz and Meek Mill can count their lucky stars after their video shoot was interrupted by gunfire this week.

According to reports, the hip-hop stars were up on a rooftop in Atlanta shooting their vid for “Buy Back the Block” when several shots rang out, interrupting filming and causing the rappers to lay low for a bit. Sources say although the shots sounded close, they didn’t happen on the actual set, but at a nearby apartment complex.

The incident didn’t stop the rappers from sharing photos of their time on set. Everyone remained and finished the video.

Gucci and 2 Chainz even shook it all off by hitting up V Live Atlanta, along with rapper Young Dolph, and spending racks on the dancers.

If you’re a hip-hop fan, you probably tuned in to watch the 2016 BET Hip-Hop Awards last night.

Check out this year’s performances up top and below.

The Bad Boy reunion tour hit Atlanta Thursday and was full of surprises!! The crowd went crazy when Lil Kim brought out Gucci Mane during her set, and Puff Daddy brought out Jeezy, Yung Joc, Boyz In The Hood, Tyrese, and of course Jodeci!! More photos and fan videos below!!

Andre 3000 and Big Boi are planning to return in a big way.

Gucci Mane announced on Instagram that he recorded a new song for Outkast, as well as collabs with Lil Wayne, Boosie Badazz, and E-40.

Following the release of his comeback project Everybody’s Looking, Gucci Mane is gearing up to release his forthcoming project Woptober sometime soon.

Just in time for the weekend, Usher is rolling out an all-star line up of features on the “G-Mix” to his single “No Limit.”

The remake includes verses from some of hip-hop’s finest including Travis Scott, 2 Chainz, A$AP Ferg, Gucci Mane, and Master P who inspired the song’s hook. Each rapper puts their own signature spin on the track, with Ferg calling himself “the new day P. Miller.” Guwop finishes things off as only he can, spitting a few bars about the rich life that we see him soaking up on Snapchat.

Usher is busy at work on his eighth album Flawed. He will also star as Sugar Ray Leonard in Hands of Stone, which hits theaters Aug. 26.

Listen to the track below: